The weather this past week-end opened as a skeet shooters dream. Halifax County Gun Club hosted their last registered skeet shoot of the year, the Portsmouth-Langley Open. This distinct name goes back some years when there were two very active gun clubs in the Tidewater area. One was the Langley Air Base in Hampton, Va. and the other in nearby Portsmouth, Va. Due to military and urban expansion, both clubs were forced to close. Determined to keep their names and traditions alive, arrangements were made with Halifax to hold their annual event.

Shooters from North Carolina, Ohio, Md. and all over Va. showed up to begin the event on Thursday. Competition was intense in the opening 12 gauge round as veteran shooter, Richie Nixon prevailed. Halifax is a favorite club of many shooters due to the great background and excellent targets thanks to modern trap machines and good mechanics who keep them in top working order.

Beautiful weather continued for the next three days which resulted in many high scores. An important highlight of the event was the number of young shooters attending. The Halifax club was represented by an absolutely outstanding group named Halifax Clay Busters. This group is a member of the Scholastic Clay Target Program (SCTP) and sponsored by the Ward Burton Wildlife Foundation, LeRave Jewelry and Halifax County Gun Club. This program is one of only a few where young people can learn about shooting sports. The program mission statement says “adult coaches and volunteers model sportsmanship, responsibility and team work while using shooting sports programs to teach these and other positive life skills to SCTP athletes”.

Boys and girls college age and under with the physical, mental maturity to participate in a team sport are eligible. For more information on this program at Halifax contact Ray Shields at 703 509 8072. Other visiting SCTP clubs were Mid-Carolina Clay Buster, Arrowhead SCTP and Richmond Conservation Park Dusters.

The club and grounds were in immaculate condition thanks to B & G members Clarence Morris, Randy Joyce and Billy Dunn. Members and visitors were also able to view the brand new, state of the art, trap field. This beautiful new field was constructed by Brian Burton and finished earlier in the week just in time for the shooters and their families to admire.

Many compliments were received on the hospitality and accommodations of the club. Halifax is well known as the friendliest club in the state. Plans are already underway for next year’s events 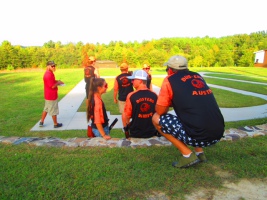 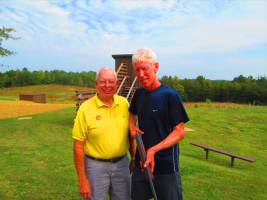 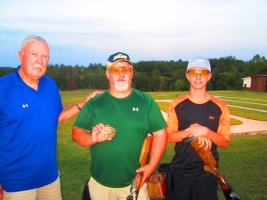 Skeet committee member, (left) Charles Daniel, awards Randleman, NC shooter Richie Nixon (center) awards for winning the 12 gauge event as well as the very difficult doubles event where two targets are launched simultaneously from two different trap machines. Shown on right is young shooter David Whipp, III (also known as D3) who finished as runner up in the 12 gauge event. Nixon and D3 tied scores in the 12 gauge event and had a sudden death shoot off to determine the winner. After a very lengthy shoot off Nixon ended up as winner. 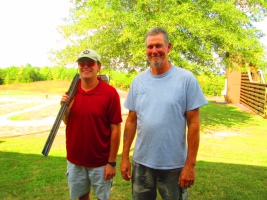 Liberty University shooter Jacob Davis (left)was winner of the .410 event as well as High Overall which is the cumulative total of all four gauges shot. Fred Wood, long time member of the Fairfax Rod and Gun Club,was runner up in the .410 event. 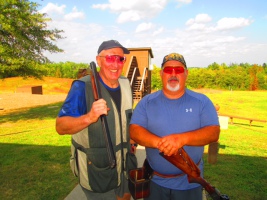 Brad Olson of Arlington, Va. (left) was the proud winner of the 28 gauge event. Mark Smith (right) was runner up. Once again, a tie score existed where a shoot off had to be used to determine the winner. After the smoke cleared, Olson was declared winner. This was Olson first visit to the club but stated he would be back for the first shoot of next year.